After several weeks of dry weather with some cooler temperatures at night there was some concern that we had been “short-changed” on our wet season.  However,  137mm in the last few days has obviated the need for carting buckets of water to newly planted trees.

In spite of the return of some wet weather there have been recent indicators of a change of season.

During the last couple of weeks we have had several sightings of this delightful little bird, often  in the same area of Melaleucas, feeding in the company of a variety of insectivorous birds.    Having had the opportunity to observe the rufous markings on the wing feathers quite closely we are sure that it is an immature Golden Whistler.  We have also seen a female Golden Whistler recently but as yet no male. I was prompted to post this photo after looking at Duncan’s photo of the handsome male Golden Whistler on his bencruachan.org/ blog/  These are our first sightings of GW since winter last year and so with recent sightings of Rufous Fantail we feel that autumn/winter is upon us.

The adult Metallic Starlings have flown north although  a few immature  birds are still about and may stay over winter as has occurred on previous occasions.  Brown-backed Honeyeaters have completed their breeding and headed north leaving behind some now obviously used examples of their once-beautiful domed nests made from paperbark and usually hanging near some water. 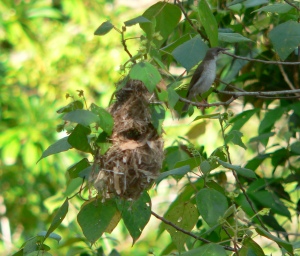 We are still seeing Black Bittern regularly and while neither of us have yet managed a photo the bird is not flying so far when disturbed so there is still hope – maybe later in the year.

While we are lucky to have many birds resident here in our tropical paradise we particularly enjoy those which visit  for a shorter period, perhaps because they do mark a change of season.

This entry was posted in Bird Observations. Bookmark the permalink.