From the Greek gymnos – naked; stoma – mouth; a reference to the exposed pores along the twigs. australianum = from Australia.

Most Australians would readily recognise Casuarinas or She-oaks as they are a prominent feature of our coastal forest communities. They often present as a tortured, windswept small tree with gnarled branches that are covered in what appear to be “pine needles”.

These pretend pine needles are in fact branchlets that support tiny, scale-like leaves that are arranged in whorls of four.

The “Daintree Christmas Tree” as it is often labelled in local nurseries, does not grow in windswept environments but prefers the moist rainforests that grow along streams as part of the riparian species mix. 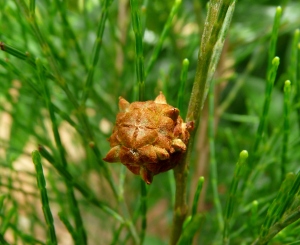 The plants distribution is extremely limited in that they occur predominantly along Noah Creek into the uplands and along Roaring Meg Creek towards the Bloomfield River.

The flowers are separate male and female on the same plant. Once fertilised the female flower develops into a cone-like fruit that when ripe sheds small winged seeds. Perhaps the wind dispersion of this plant species in some way explains the reason that they have not been able to escape the refugia that they inhabit. (Noah Creek is regarded as one of four significant plant refugia in the Daintree. The others being Oliver Creek, Cooper Creek and Hutchinsons Creek all of which occur between the Daintree River and Cape Tribulation).

Having now grown several of these plants over the years I understand why they are promoted as Christmas Tree substitutes.

They seem to grow into very well shaped small trees with a conifer-like habit, although quite slow growing compared to other rainforest trees.

While purists may argue that this rare plant belongs in its very limited refugia and should not be spread about into other areas. Few would argue that it should not  be protected in its natural environment, it is however a very “polite” plant that doesn’t appear to encroach on its neighbors and is certainly not showing any weediness. Perhaps it deserves a chance to explore other soil types and a greater climatic range.