From the Latin flos – flower; scoparie – like a broom: a reference to the flower spike in some species. scandens = climbing.

This attractive scrambling plant belongs to a small genus of about 20 species of predominantly tropical plants with 1 possibly 2 species extending into northern Australia (some texts list Floscopa panniculata but I suspect it may be confused with another genus in commelinaceae).

The plant occurs from the Daintree River south to the Murray River near Tully. It is an herbaceous monocotyledon that enjoys moist, boggy situations near swamps and soaks. 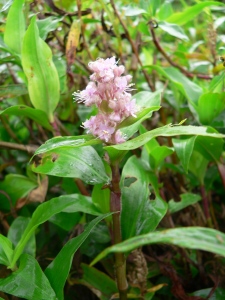 We stumbled across the above plant while doing Pond Apple removal in a difficult to access part of our property. It was growing at the edge of a dense swathe of exotic Para Grass – Brachiaria mutica. We were taken by the soft pink flowers struggling up through the para grass. While we were fairly sure that the plant was some form of Commelinaceae, as we have Aneilima, Commelina and Pollia spp. on the property, we were baffled as to what it may be. Fortunately a botanical friend was due to visit us soon for a botanical survey for our rates rebate with the local council. While we were walking around he suggested we look out for a plant called Floscopa and set about trying to describe the plant. As we were not far from where we had seen the unkown plant I suggested he I.D it for us and he was gobsmacked when he saw the plant we had asked him to I.D was the same plant that he was trying to get us to look out for. All in all everyone was happy, we now new that the unknown plant was not yet another exotic that we had to contend with and Bob Jago was able to find a plant he had been searching for.

We were concerned for the future of this plant as it was struggling up through this invasive grass and appeared to be losing the fight. We decided to see how well it would strike from cuttings and very soon realised that like the bulk of Commelinaceae species it roots from every node. 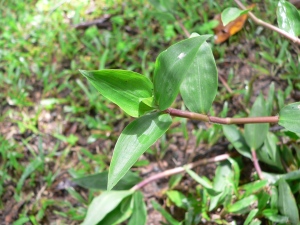 We now plan to propogate a lot more and to establish the plants in suitable locations in our established wetlands.

This plant species has not to our knowledge been utilised as a garden plant but may well have a future in wet areas in frost free parts of the temperate and tropical zones.