Named after A.W. Dockrill, a botanist who specialises in Australian orchids. calamiformis = having a reed-like form.

This species was previously included with Dendrobium teretifolia as a northern var. fasciculatum

This orchid species is by far the most prevalent epiphytic orchid at Wild Wings and Swampy Things Nature Refuge.

It appears to attach itself to any tree that has a rough flaky bark.

For much of the year it presents itself as a series of pendulous terete leaves, usually on the underside of a branch or on the  trunk of an older tree.

Flowering is often towards the end of the dry season, with the flowers only lasting a few days.

A couple of days ago Denis Wilson (The Nature of Robertson) featured a southern cousin of this plant seen at Jervis Bay (Dockrillia teretifolia). 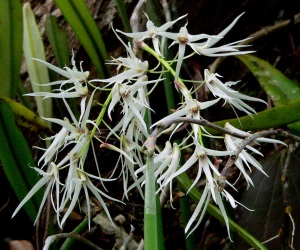 The other striking feature of these attractive orchids is their delicate sweet scent.

This is particularly strong early morning and late afternoon, but certainly adds to the delight of these stunning plants