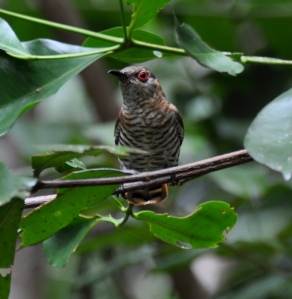 Male Little Bronze-Cuckoo (Chalcites minutillus)was trying to get himself a feed while being harassed by other insect eating birds, in particular a persistent Rufous Fantail.  The caterpillar attracting so much attention was the distinctive larva of a particularly bright day-flying Moth (Dysphania numana) which is often seen in the late afternoon and is known by the common name of Four O’clock Moth.

The larvae of Dysphania numana feed on the leaves of Carallia brachiata which is the only land-based member of the family Rhizophoraceae which includes many Mangrove species.  Insignificant tiny white flowers are followed by some very small tasty sweet fruit. 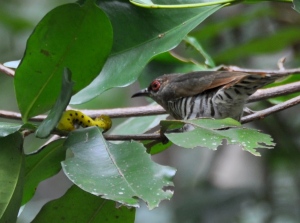 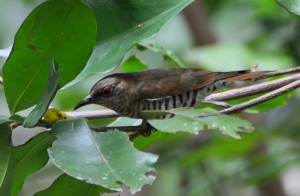 5 responses to “Caterpillar & Cuckoo in Carallia”