Our Daintree Christmas-tree is traditionally a living tree well established in a pot.  Of course this means that we have trees of varying sizes but this is half the fun.  Ficus benjamina, a well known native fig, is often a popular choice as they survive so well in pots.  One of our very favourite Ficus benjamina started life here doing its duty in a pot for several years but since  it was planted out approximately 20 years ago it has ‘hit its straps’ and turned into a magnificent specimen which often fruits three times in a year.   The fruit of this fig are popular with a large number of bird species; but for the last two weeks the dominant species have been Metallic Starling (Aplonis metallica) and Double-eyed Fig-Parrot (Cyclopsitta diophthalma race macleayana).

Oh, you’ve caught me with a mouthful!

Metallic Starlings consume the fruit of the fig voraciously as they move continuously through the tree, chattering all the while.  In comparison the movement of the Double-eyed Fig-Parrots is unhurried as they walk quietly along branches;  this  behaviour  combined with their cryptic colours make them exceedlingly difficult to locate.  Their measured movements reminded us of the Red-cheeked Parrots (Geoffroyus geoffroyi) that we were fortunate to be able to observe during our holiday at Iron Range National Park earlier this year.  The male Red-cheeked Parrot who is the most brightly coloured of the pair turned his back on us when he realized he was being observed and as his back was the same shade of green as the foliage he blended perfectly.

So back to Double-eyed Fig-Parrot, Australia’s smallest parrot, I have a number of photos where all I can see is an eye looking at the camera and part of a green body!   The female doesn’t have the red cheek of the male but she is just as good at keeping her head behind a leaf most of the time.   They are quite delightful little birds to observe as they patiently roll the fig fruit around with their tongues in order to extract the seeds which they consume leaving little bits of discarded fruit to drop to the ground.  It is often the fruit dropping from a tree which is the first indication of the parrots presence together with some conversational twitters. 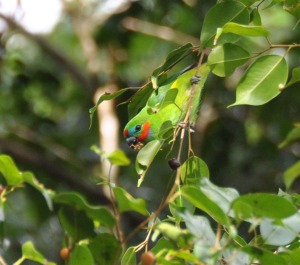