Well guess who was given “The Complete Field Guide to Stick and Leaf Insects of Australia” by Paul D Brock and Jack W Hasenpusch?  Its a wonderful book that we’ve both been enjoying;  we’re also having lots of fun finding and trying to identify stick insects…so here’s hoping we’ve got the ID right on this one!

The first photo is a female Strong Stick-insect (Anchiale briareus) that I found in a Callistemon.  I was walking past with my secateurs and decided that the bush needed a tip prune to prevent it becoming leggy – and there she was, beautifully camouflaged as part of the branch.  Luckily I was working carefully so I saw her in plenty of time!

The next day I returned to see if a male was about yet and there he was – easy to disturb into flight so I managed to get a good look at his wings. 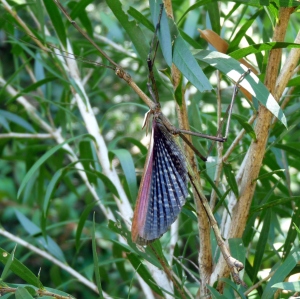 So that night I went out quietly just to see if they’d found each other……….and they had!  This last photo shows male and female Anchiale briareus together.  It also shows quite clearly that one of the female’s front legs is much shorter than the other.  According to the Stick Insect book mentioned above,  nymphs have the ability to regrow a leg but the regrown leg may be significantly smaller than the others.

This entry was posted in Stick-insects and tagged Anchiale briareus, Strong Stick-insect. Bookmark the permalink.