Although we have already posted some information on Gardenia actinocarpa there is a follow-up story……………..

We have two plants growing in tubs on our verandah, so that we can maximize our enjoyment of their delightfully intense perfume.  The two verandah plants both produce only female flowers.   Both our plants continually set seed which surprised us as they are the only Gardenia actinocarpa growing on the property.  So where did the male pollen grains come from?  At first we thought that perhaps the seed would be infertile.  However, we were able to germinate a few seed and we grew a couple of very healthy, sturdy plants that eventually flowered themselves – beautiful white flowers which have a lovely perfume, not quite as intense as the female parent but the flowers are dramatically larger with a 90mm diameter when fully opened.

After a little head scratching we realized that the progeny bear many similarities to a Gardenia scabrella which is growing in the garden on the other side of the house.   Our G.scabrella, which produces only male flowers, was purchased from a nursery, its area of natural distribution is further north on Cape York Peninsula.  It is a hardy shrub with large, white flowers completely lacking in scent.  The photo below is of a young flower which has not fully opened. 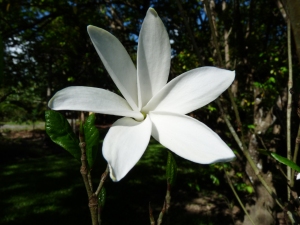 We rarely see our G. scabrella without flowers so cross pollination is not hard to envisage.  The leaves of the new hybrid shrubs are very similar to the leaves of G. scabrella, the shrubs have a similar sturdy growth habit and while the flowers look like G.scabrella they have a perfume similar to, but slightly less intense than the female parent G. actinocarpa.  So, in a serendipitous moment we have accidentally brought two plants close enough to cross-pollinate and succeeded in growing a hardy shrub which produces large, beautifully scented flowers for much of the year.

This entry was posted in Daintree Plants and tagged Gardenia actinocarpa, Hybrid Gardenia. Bookmark the permalink.