During the last few weeks we have frequently heard dingoes calling, mostly at night but there have been one or two occasions during the day.  Last night there were three animals harmonizing quite beautifully on the hills;  on a still, moonlight night it is quite an eerie sound and I wonder how all the creatures vulnerable to their attack might be feeling.   In spite of their, at times, close proximity (we found a scat only a few metres from the carport) we have been unable to see them and so have no idea how close to a true dingo they are.

This afternoon we spent a couple of hours enjoying a walk around the property – I was trying not to focus on the various weeds I noticed that required attention and for the most part we talked about the progress that had been made in various areas.  We took cameras as well as our binos. but many of the birds we saw were busy feeding and were often in shade so photographic opportunities were very limited.  The arrival of our winter birds has been announced by the return of Rufous and Grey Fantails, which we observed feeding with Fairy and Large-billed Gerygones, Grey Whistlers, a female Golden Whistler, lots of Lovely Wrens and Little Shrike-thrush.  We also saw Spectacled and White-eared Monarchs, the latter sighting being two immature birds which is of particular interest as Tyto Tony reported  a similar sighting.  Our list also included Varied Triller, Spangled Drongo, Figbirds, Helmeted Friarbird, Yellow-spotted, Dusky, Macleays and Graceful Honeyeaters, Yellow Oriole, Sunbirds, Silver Eyes, Mistletoe bird as well as a Laughing Kookaburra and a Shining Flycatcher.  No sign of the other Kingfisher relatives which was unusual and no sign of the small flock of immature Metallic Starlings which has been feeding frantically and doing practice flights for the last few weeks.  Perhaps they have left for the winter along with the Brown-backed Honeyeaters  and the Black Bittern neither of which were evident this afternoon.

We heard but could not see Pale-vented Bush-hens but Orange-footed Scrub-fowl are now well established here.  We heard and saw Rainbow Bee-eaters and watched them bathing in one of the ponds.

Two Whistling Kites were soaring around with a Darter, while later we saw a Pacific Baza circling in the vicinity of a flock of Top-knot pigeons and unusually the pigeons were wheeling around, apparently enjoying a thermal with the Baza.

And just to finish off with some colour – we did manage a few shots of the Lovely wrens enjoying their favourite shallow bird bath – we think they must have had a good breeding season as numbers seem to have increased considerably ……. plenty of room and lots of food for them here. 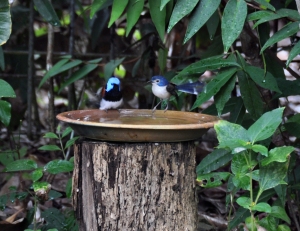 This entry was posted in Bird Observations and tagged Lovely Fairy-wren, May bird list. Bookmark the permalink.

4 responses to “Living in harmony”