Since Snail has been writing about Litoria junggay I decided we should join in the discussion by adding a couple of photos of the frogs we used to know as Litoria lesueuri  or Stony-Creek Frogs. As Snail has mentioned, this species is now described as L. jungguy and  L. wilcoxii and according to my “Rainforest Frogs of the Wet Tropics” by Conrad Hoskin and Jean-Marc Hero this distinction is based on genetic data as the two species are morphologically very similar and cannot be reliably distinguished in the field.   As we are in the Northern part of the range we should be seeing Litoria junggay so I’m staying with that.  These males are pictured sitting on the edge of our fresh-water swimming pool – I thought the bricks gave a good indication of their size.

Inspired by Snail’s discussion I went out with a torch a couple of nights ago to see if I could find any female Stony-Creek frogs – we always have males sitting around the pool edge but the females are not as commonly seen.  And I found one – the male had also found her and he wasn’t letting go even when she frog-leaped quite a distance into the garden.  As you can see there is quite a difference in both the size and colour of the male and female of the species.

These frogs have one of the softest sounding calls of any of our frogs – more like a loud purr.  They are commonly associated with rocky and sandy streams, the males often being found near water where as the females can be located some distance away.  We are amused by the fact that they are attracted to our pool and breed in it quite successfully although they are described as ‘stream breeders’;  we have water moving through an undergravel filter system and spraying over the surface of the pool for about 6 hours a day plus a small fountain which runs directly from a solar panel and is therefore dependent on the sunlight but this seems to be sufficient to keep quite a few different frog species happy as well as maintaining a lovely cooling off place for us. 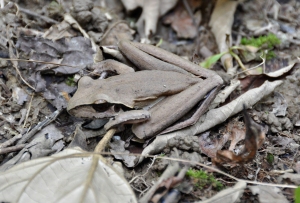 and this one was attempting to gain entry to our house in December last year.   I have included the photo as it shows the colour variations between females as well as her inner thigh markings. 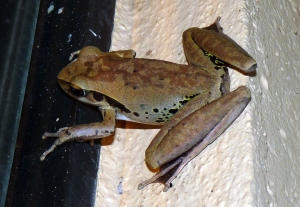 And just to finish off, when I was walking back to the house from the pool the other night I noticed a fluffy ball on the leaf of a Ginger plant – it wasn’t at all disturbed by the flash from the camera as its head was tucked so far out of sight and I was careful not to brush against the leaf as I walked past. 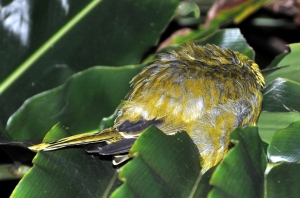