During a pruning frenzy yesterday I came across this rather large Spiny Leaf Insect or Macleays Spectre (Extatosoma tiaratum).  She was looking decidedly nervous as I approached enthusiastically with my secateurs, snipping away at branches and so removing leaves she had been happily feeding upon.

I don’t blame her for feeling under threat as she was left somewhat exposed, despite her good camouflage.  Needless to say I changed course and left that area of the garden for another day.  Luckily we have planted quite a number of Xanthostemon verticillatus as it appears to be a favourite food for a variety of stick insects.  A quick check today has revealed that she is on the same bush but safely tucked under some green cover.  This garden surrounds the pool where I found a male Spiny Leaf Insect in 2013.  Which leads me to wonder if I need to improve my powers of observation ….. or perhaps I haven’t been spending enough time tending to the shrubs in that garden.

And in other news ……….. the Amethyst python curled up around her eggs since November last year has now moved on.  My granddaughter and I checked under the cover on Jan 1st and both snakes were there.  When I checked on Jan 3rd the Carpet Snake was still guarding her eggs but only the empty shells of the Amethyst were left.  No sign of young snakes and no sign of the adult.  The Carpet snake is still curled up in the same area but in recent days I have seen her stretched out and I can see her eggs are empty.  We have no idea why she remains in the same position. 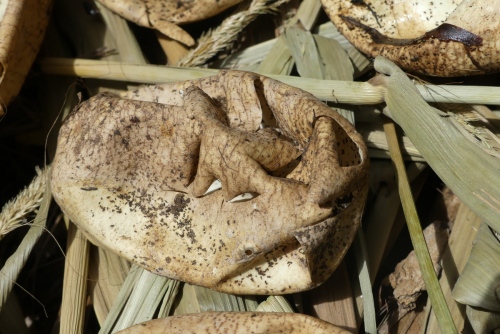 Lichen on the wall?

I found this tiny Phasmid (about 7 cm in length) hanging onto the wall of our house late yesterday afternoon.    Extatosoma tiaratum is known to sometimes mimic lichen as a camouflage at an early instar, however as our house wall is not covered in lichen it looked very exposed and vulnerable.

With the light rapidly fading we had trouble getting a satisfactory photo.  A second attempt after dark with a torch as well as the camera flash has yielded better results.  I haven’t adjusted the colour at all – it really does look quite green. 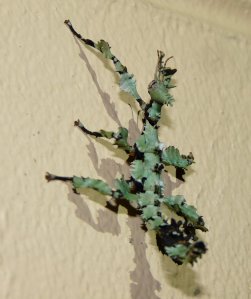 After the photo session we moved it onto a plant so it had a better chance of avoiding attack by predator.  This morning it was back on the underside of the eaves;  although the plant may have looked an okay place to us, it apparently wasn’t considered suitable by the Phasmid.

Since we converted our salt-water chlorinated swimming pool to a fresh-water swimming pond 6 years ago it has gradually become a more inviting habitat for many local creatures as well as being a delightful place to cool off during the summer months. 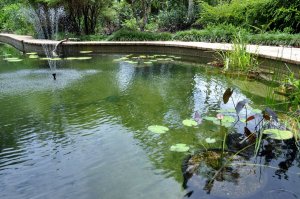 I walked into the pool garden this afternoon and was amazed to find a male Macleay’s Spectre hanging, in a typical pose, on the strap-like leaf of a Louisiana Iris that is growing in a pot on the steps.  This extraordinary Phasmid is widespread in parts of New South Wales and S.E. Queensland and it also inhabits North Queensland rainforests ‘though as you can imagine they are not easily found. After taking a few photos I invited it on to my finger so I could move it onto a shrub in the garden as it looked so vulnerable on the edge of the pool.  After waiting more than 20 years to find a Macleay’s Spectre on the property I didn’t want it to indulge in unnecessarily risky behaviour.

In order to take a better photo of the head I had to gently encourage the insect to the top-side of the branch where it ‘froze’ in position no doubt trusting that its amazing camouflage would protect it from attack. After the photo session I watched as it made its way further into the protection of the twigs and leaves.

Another delight in the pool garden this afternoon was the discovery of this exquisite nest which I am fairly certain has been built and used by a pair of Graceful Honeyeater although  as the nest is now abandoned I can not be sure of the owner/builders. 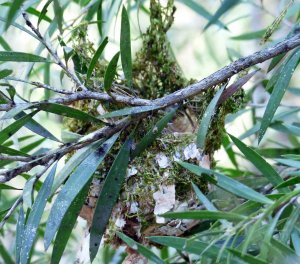 Fairies in the garden

Not real fairies but a strikingly beautiful stick-insect – and if you’ve never considered these insects to be attractive then just look at these photos!

This description of the Hasenpusch Family Stick-insect (Parapodacanthus hasenpuschorum) really paints the picture.  From   the book written by Paul Brock and Jack Hasenpusch  “On several occasions visitors to the rainforest at Garradunga have reluctantly reported seeing ‘fairies with pink wings’ flying overhead between the trees..”

And recently we have been lucky enough to see a female on two separate occasions.  Neither Allen nor I have observed this species prior to having a copy of the aforementioned book and I’m sure that we would remember.

The females are a vivid, glossy green with bright pink/cerise wings – we have not yet seen a male of this species but they also have pink wings and the pink spiny tubercules.   Both males and females can fly well; certainly the females we have seen could and they really do look like pink-winged fairies.

In order to be able to photograph the wings Allen gently held the insect – she didn’t emit any unpleasant odour which apparently they can do when handled so I don’t think she was too stressed.   I just took a couple of quick photos and then he let her go and she took off  fast and  high into a nearby tree.

Well guess who was given “The Complete Field Guide to Stick and Leaf Insects of Australia” by Paul D Brock and Jack W Hasenpusch?  Its a wonderful book that we’ve both been enjoying;  we’re also having lots of fun finding and trying to identify stick insects…so here’s hoping we’ve got the ID right on this one!

The first photo is a female Strong Stick-insect (Anchiale briareus) that I found in a Callistemon.  I was walking past with my secateurs and decided that the bush needed a tip prune to prevent it becoming leggy – and there she was, beautifully camouflaged as part of the branch.  END_OF_DOCUMENT_TOKEN_TO_BE_REPLACED