The pink lilies in the foreground of this photo are an un-named species of Nymphaea apparently endemic to the Daintree Valley.  The flower varies from shades of pink through to blue, however the vital diagnostic clue to this species is the dark vertical line on the stem of the flower.   The flowers don’t open until the sun is shining and they close as soon as they are in the afternoon shadow.  The small white flowers in the background belong to Water Snowflake (Nympoides indica)which is a favourite of the Green Pygmy Geese.   Towards the end of last year several of our ponds had extensive areas of  Nymphoides and we wondered if it was going to take over but during the last few months the Daintree lily has made a comeback and there are beautiful flowers everywhere.

Today as I paddled over to one of the islands to do some maintenance  I disturbed the Magpie Geese for a while but they were back in the afternoon so I took a couple of photos from the bird hide.  The late afternoon sun reflecting off their ‘whitish’ feathers as well as off the shining wet necks did make the photography a challenge but I wanted to capture the scene.   Although the numbers of Magpie Geese certainly vary during the year we now have a small gaggle which resides nearly all year around and even nested successfully a couple of years ago. 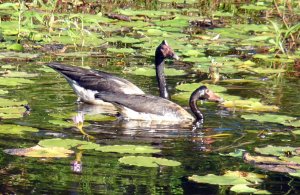 This entry was posted in Bird Observations, Pond Life. Bookmark the permalink.

4 responses to “Water lilies and Geese”