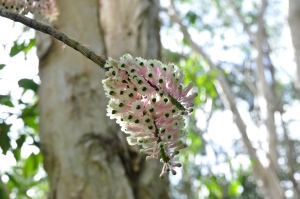 Bottlebrush Orchids are once again in flower at Wildwings.

This unusual orchid, which was previously known as Dendrobium smillieae, prefers to grow on flaky barked trees such as Melaleucas and Leichhardts.

In this case it is Melalueca leucadendra.

The flowers form at the ends of long canes in a tight cluster. Sometimes, as in this case above, the spike will split into two heads making the “bottlebrush” a little strange.

Flowers begin to open from the bottom of the cane towards the tip of the spike and last several weeks before collapsing.

The flowers are a subtle blend of soft pink, white and green.

Unlike some of the more flamboyant orchid flowers the petals of the Bottlebrush Orchid are fused together for much of their length and consequently are tube-like with a ruffle of fringed petals towards the ends. 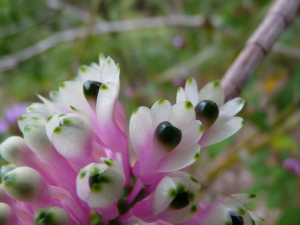 This entry was posted in Daintree Plants, Orchids and tagged Bottlebrush Orchid. Bookmark the permalink.