Broken Hill was interesting to explore and we enjoyed our morning at Silverton, especially sighting the Chirruping Wedgebill on the way there, but after two nights in a van park we were well and truly ready for some bush camping. 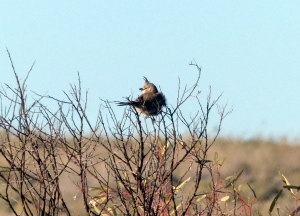 Our journey continued on the Silver City Highway, heading south – through Wentworth where we crossed the Darling river and then just a few minutes later we were crossing the mighty Murray and entering the state of Victoria.  Mildura provided us with an opportunity to restock provisions but as we set off down the road again we saw dark clouds gathered on the horizon.  As we drove towards the clouds the sky became darker and we were soon driving through a heavy shower of rain.
A lunch stop was postponed and snack bars consumed as we continued towards Hattah-Kulkyne.  By the time we entered this well known and loved National Park the rain had eased and the beautiful sight of Regent Parrots feeding on the roadside we took as a very welcome sign. 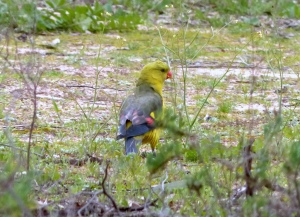 Majestic old River Red Gums lined the edge of Lake Mournpall but the camping areas are set away from these well known ‘widow makers’ and amongst the much safer Black Box – (Eucalyptus largiflorens), still with a lake view from the tent.  There are so many suitable nesting holes in all those fabulous ‘Gums’, it was a delight to watch Mallee Ringnecks, and Galahs checking out holes and taking in some leafy material to make a comfortable nest.  Yellow Rosellas were also present in large numbers, they have the most delightful bell-like call, another new species for us.

While Lake Mournpall was home to Australian Shelduck, Grey and Chestnut Teal, Pelicans, Australasian Grebes, Black-winged Stilt and Wood ducks, they were few in number.  Late one afternoon we visited Lake Hattah which has much less water remaining and many, many more birds.  Hundreds of Red-necked Avocet, Black-winged Stilt and Grey Teal moved across the shallow water feeding.  Neither of us had ever seen Avocet and what a fabulous sight they were, we stayed until the sun went down just enjoying the spectacle and watching them feed, preen gather together, fly up across the water and then alight to begin feeding again.

We covered quite a lot of the tracks in the park, by vehicle as well as on foot,  we saw some wonderful birds and enjoyed the scenery tremendously.  The weather, although cold didn’t stay wet and we made the most of every ray of sunshine!  Although both ex-Victorians we had quite forgotten about the vagaries of the weather in this southern state. We had another couple of special moments of seeing a ‘new’ bird;  Chestnut-backed Quail-thrush – a long look at both male and female, and a good look at male and female Gilbert’s Whistler.

There was 3G coverage at our camp so when the forecast of yet another cold front appeared we decided to move our base on a fine day and set off for Murray-Sunset N.P. – just down the road.

This entry was posted in Excursions. Bookmark the permalink.